[NB The copy paste from the thread unroll resulted in a mutilated wordpress text, leaving out a number of pictured text fragments.  I have repaired the text now.  My excuses. ]

E.D. Hirsch, Jr., delivered a keynote at Making Shift Happen 2018, in Amsterdam (no, not online). In his books, Hirsch evaded the question of nature/nature in intelligence. Surprisingly, now his keynote centered on the idea of the ‘blank slate’ originating with John Locke. 1/..

Also know as ‘tabula rasa’, or ‘white paper’. On (the reception of) Locke’s idea of education and the blank slate, see Margaret J. M. Ezell (1983). ‘John Locke’s Images of Childhood’ jstor.org/stable/2738281 There’s more to it than the word ‘blank’ suggests. 2/..
.
Of course, nowadays ‘The Blank Slate’ is the 2002 book by Steven Pinker on the subject. An essay by Pinker, using material of the book: apadivisions.org/division-1/pub… I haven’t read the book yet, but I see Pinker neglects Galton’s influential ideas on heritability. It is nature! 3/..
.
Having followed the debate on heritability of differences in intelligence for almost half a century (see benwilbrink.nl/publicaties/72… … esp. the English refs), I am still confused. Yet the usual thinking in educational circles, IQ and talent being innate, is for sure at fault. 4/..
.
Loads of questions are to be asked on nature/nurture topics and their import for the ideal of fair schooling. For 1 thing: the slate is blank indeed, no cultural content having been inscribed on it yet; the slate itself will be another story: its qualities being contingent. 5/..
.
In actual behavior genetics research (Plomin: Blueprint) loci on the human genome are being correlated with cultural achievements (e.g. years of schooling; IQ). That does not look like good science at all: correlating molecular differences with cultural ones). 6/..
.
Even worse is the post hoc ergo propter hoc fallacy: these correlations must be causal (as stated in some publications by Plomin). A black box of 10 of 15 years should be no problem? Come on. These ‘correlations’ are not causal models at all. 7/..
.

This black box methodology does not prevent Plomin from telling us how education should make use of the results in behavior genetics: by differentiating and personalizing instruction. This is ridiculous as well as terrifying. Read it in: ‘G is for Genes: The Impact of Genetics on Education and Achievement’ http://eu.wiley.com/WileyCDA/WileyTitle/productCd-1118482786.html or Blueprint https://www.penguin.co.uk/articles/2018/robert-plomin-on-understanding-our-dna.html 8/..

Is your DNA a blueprint (as Plomin strongly suggests it is)? A homunculus in the fertilized cell? “There is not, in any normal sense of the word, a representation of the final organism contained within the DNA” p. 4 in Kevin Mitchell 2018 assets.press.princeton.edu/chapters/s1325… 9/..

In a way, Kevin Mitchell’s ‘wiring of the brain’ is about building the ‘blank slate’, the qualities of the slate being dependent on DNA as well as on the vicissitudes of the developmental processes involved here. Of course, development does not stop at birth: it’ll continue. 11/..
.
If differences in intelligence or talent (assuming them to be valid concepts) are partly heritable, then the mechanism of necessity can’t be cultural content itself, it must be in the ways cultural content can be obtained or mastered in more ore less efficient (brain) ways. 12/..
.
Psychologists have therefore researched speed as a possible factor underlying general intelligence ‘g’. Philip A. Vernon (Ed.) 1987 ‘Speed of information-processing and intelligence’ Ablex benwilbrink.nl/literature/per… (search Scholar) Example of research: sci-hub.tw/10.1016/0160-2… 13/..
.
1987 long ago? Read Vernon’s 2008 update ‘Intelligence and speed of information-processing: A review of 50 years of research’ sci-hub.tw/10.1016/j.paid… … “phenotypic correlations between IQ and mental speed are substantially attributable to correlated genetic factors” 14/..
.

What might be yet more basic than neural speed: speed at the cellular level! Curious? Read David C. Geary 2018 ‘Efficiency of mitochondrial functioning as the fundamental biological mechanism of general intelligence (g)’, Psychological Review https://www.researchgate.net/publication/325877307_Efficiency_of_mitochondrial_functioning_as_the_fundamental_biological_mechanism_of_general_intelligence_g_Psychological_Review 15/..

Human evolution works by variation, by individual differences that is. There will be differences already at birth, because of DNA, mitochondrial DNA (see Geary 2018) and brain development (Mitchell 2018). Small differences (they might give an edge) or larger ones (pathologies). 16/..
.

The neonate doesn’t have any culture yet, his ‘intelligence’ in the cultural sense is nil. In the biological sense there is, indeed, no ‘blank slate’. What is Pinker’s take? Steven Pinker 2002 ‘The blank slate. The modern denial of human nature’ https://stevenpinker.com/publications/blank-slate 17/..

Don’t have the book? Read the earlier Tanner lecture: ‘The Blank Slate, the Noble Savage, and the Ghost in the Machine’ unites.uqam.ca/philo/cours/PH… ‘the Blank Slate: that the human mind is infinitely plastic, with all its structure coming from reinforcement and socialization’ 18/..

I’ve formed a crude idea what Pinker’s ‘Blank slate’ is about. It is cultural history, moral philosophy, and a lot of other things. A fantastic, erudite book. It is also about pseudo-science, intellectual censorship, and other ailments (we know education also suffers from). 19/..
.
Yet Pinker expresses a strong belief in behavior genetics, getting carried away by some impressive ‘results’ of twin research. One problem with that research: low SES families underrepresented. Another one: disregarding trends like the evidently environmental Flynn effect! 20/..
.
Nature versus nurture is a false dichotomy in this sense: we all come into this world without having chosen our own parents (family environment, SES) and DNA. Any theory of justice will have to deal with that, and so they do! John Rawls. Amartya Sen. Martha Nussbaum. 21/..  [22/.. deleted {this was the thread unroll of tweets 1-20}]

John Rawls 1971 ‘A theory of justice’ Clarendon Press (1st edition) http://www.hup.harvard.edu/catalog.php?isbn=9780674000780 The not at all ‘blank slate’ (Rawls does not call it that) with John Rawls is the genetic as well as the societal (family; SES) position one is conceived/born in. 23/..

.
Rawls again on the fact of life: differences in genetic endowments and social positions one is born with/into. Nothing moral involved. Rawls does not elaborate on consequences of his theory of justice for education; some stray remarks in his book must suffice, such as p. 102 and 107: 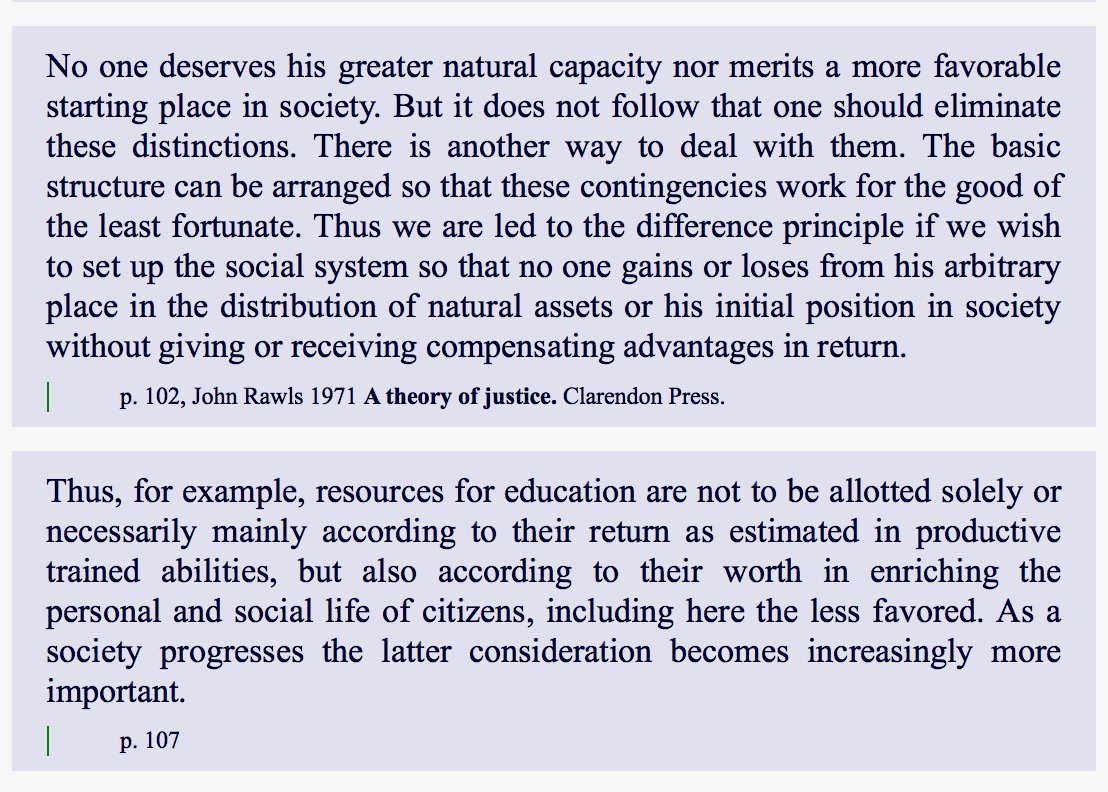 .
And another quote on the assets, nature as wel as nurture, one is born with and has grown up with. These theories of justice (include Sen & Nussbaum) furnish a solid grounding for further analyses of the (scientific) possibilities and impossibilities of fair schooling. 26/.. 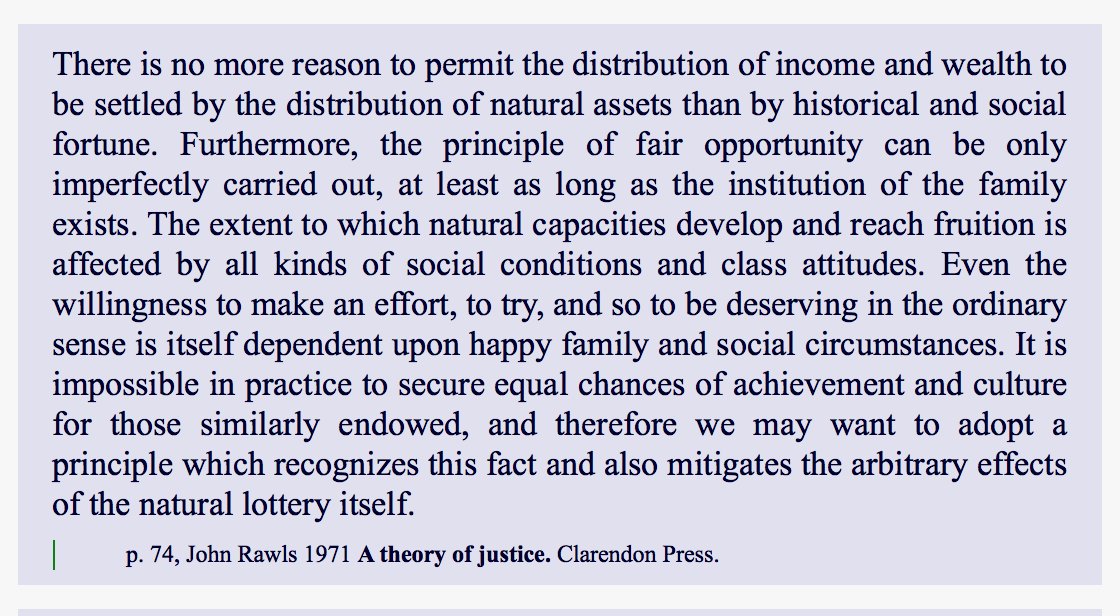 A good open access source on the work of John Rawls is Wenar, Leif, “John Rawls”, The Stanford Encyclopedia of Philosophy (Spring 2017 Edition), Edward N. Zalta (ed.), URL = plato.stanford.edu/archives/spr20… Chapter 4. Justice as Fairness: Justice within a Liberal Society. 28/..
.
Work of Sen, Nussbaum and Robeyns on theory of justice is known as the ‘capability approach’. Open access: Robeyns, Ingrid, “The Capability Approach”, The Stanford Encyclopedia of Philosophy (Winter 2016 Edition) Edward N. Zalta (ed.) plato.stanford.edu/archives/win20… @IngridRobeyns 29/..
.
Robeyns: “The main reason why the capability approach holds that it is better to focus on the ends rather than the means, is that people differ in their ability to convert means into valuable opportunities (capabilities) or outcomes (functionings) (Sen 1992: 26–28, 36–38).” 30/..
.

The ends are the capabilities (as I understand it). Nussbaum ‘Creating capabilities’ Harvard UP http://www.hup.harvard.edu/catalog.php?isbn=9780674072350 p. 32-33) sums up 10 central ones, among them: Life; Bodily health; Sense, imagination, and thought [‘informed and cultivated by an adequate education’]; Emotions; Practical reason. 31/n

These individual differences in abilities are the crux of the (not really) blank slate matter; the abilities are called ‘conversion factors’ (see Robeyns section 2.4). I take it that, in the case of young children, these are just their natural assets (nature as well as nurture). 32/n
.
There might be no discussion on nature versus nurture in the capability literature, at least I have not found it yet. Both are important. Nature: especially one’s sex. Nurture: esp. one’s class. E.g. Martha Nussbaum ‘Women and human development. The capabilities approach’ (esp. India) cambridge.org/nl/academic/su… 33/n
.
The general idea: whatever one’s ‘slate’ (nature and nurture), we are all entitled to the (central) capabilities, to a good life. Education (like Rawls, the capability theorists do not speculate on education) can be helpful (our moral obligation), or not (wholly / at all). 34/n
.
Let’s look at psychology: Thorndike (about 1900) took the heritability avenue, against voices emphasising nurture (milieu, SES). Plomin has inherited that kind of thinking. Before him: Arthur Jensen. In a major way, the educational psychology testing movement valorises behaviour genetical theory. 35/n
.
Sociology tends to disregard genetic differences (exc. sex), emphasising environment (nurture). It seems a reasonable stance: environmental influences might be influenced or repaired, genetic ones much less. Extreme position: education should be able to repair disadvantages. 36/n
.
Large volumes of paper have been spent on psychological and sociological theories and debates on issues of the blank slate: nature vs nurture. For the educationalist counts only: differences between young children are morally neutral, whatever their origin; act accordingly. 37/n
.

Let me cite one psychologist, a big influencer, Benjamin Bloom: “Dr. Bloom contends that much of individual differences in school learning may be regarded as man-made and accidental rather than fixed in the individual at the time of conception” Benjamin Bloom 1976 Human characteristics and school learning. McGraw Hill. http://benwilbrink.nl/projecten/fair_schooling.htm#Bloom_1976 His mastery concept was meant to show fair schooling to be possible, and it did in this experiment: benwilbrink.wordpress.com/2018/09/ (note. If schooling is primarily a matter of acquiring biologically secondary knowledge (David Geary), there is no reason to expect succes in schooling necessarily to be strongly dependent on individual differences as they can be observed in, e.g., six year olds. I’d love to see research on this conjecture 😉  38/n

There is a strange inconsistency between ‘blank slate’ beliefs in educational circles, and the beliefs in talents that develop and IQ’s that are more or less fixed—both genetically determined. The latter giving rise to ideas of individualisation in education. 39/n
.
[This thread has no proper ending, and maybe I will continue to add observations to it.  There is a large psychological literature on heritability of personal characteristics, and a large sociological literature criticising the latter. I will not further comment on that literature here. The roots of beliefs in heritability lie in the 19th century with Galton’s ‘Hereditary genius’, for a large part. Galton did not believe circumstances of living of common people to be of influence on their lack of genius.  Of course, there were also strong voices emphasising just that: poverty is an important cause of lack of ‘intelligence’ of most people. Somehow, even knowing the horrors the eugenics movement (more or less started by Galton) had brought humanity, the heritability creed is rather dominant in differential psychology, a recent excess being the Plomin book ‘Blueprint’. Of course, blank slate theories ar no alternative to that. I prefer the work of Nisbett, Flynn, the Amsterdam group of Han van der Maas working on the concept of intelligence, John Carroll emphasising ‘intelligence’ and ‘math ability’ are non-concepts (specific abilities are the entities that psychology must work with).]
Advertisement